By: Jamie Moore, Director of Sourcing and Sustainability

When you pick up that gallon of milk at the store, do you ever think about how it got there? I do, so I asked the kind folks at Turner Dairy to enlighten me. Turner’s supplies Parkhurst with many of our dairy products, including milk, half & half, egg nog, and more.

So how does milk get from the cow to Parkhurst or your local grocery store? To answer that question, Chuck Turner and his team gave me a full-fledged tour of their family-owned operation, as well as that of one of the farmers who provides their milk.

Our tour started at Turner’s, located in Penn Hills, PA. The dairy was founded in 1930 (80 years ago!) by Chuck’s grandfather, Charles Turner. Since then, it has continued to expand and thrive, thanks in large part to the company’s commitment to extremely high standards. In fact, Turner’s milk regularly wins awards at the World Dairy Expo in Madison, WI – where they compete with much larger dairies in the heart of dairy country!

The first thing Chuck pointed out on our tour was Turner’s testing labs, where all of their milk is tested for bacteria as it comes into the facility (as raw milk), and as it leaves to be distributed to customers. Turner’s adheres to even stricter standards than what’s required by the FDA, ensuring that their customers receive the highest-quality milk.

As we left the lab, Chuck pointed out two enormous silos (below). After the raw milk arrives and passes bacterial testing, it is pumped into these silos, which each hold 50,000 gallons of milk. From there, we entered the processing facility, which houses room upon room filled with a maze of stainless steel pipes that transport the milk as it’s processed.

Turner’s milk is pasteurized and homogenized through an energy-efficient system that utilizes heat transfer to ensure that no energy is wasted. To be pasteurized, milk must be heated to 175 degrees, and held at that temperature for 20 seconds. After pasteurization, the milk is homogenized – a process which “explodes” the fat particles in milk so that the milk and the cream don’t separate when you’re milk’s sitting in your fridge.

Next, Turner’s packaging room was a bustle of activity, with 4 separate systems working to bottle milk, iced tea, and juice. By far the busiest of these stations was the one that packed the milk into pint-size cartons for use in schools. This station typically runs for 16 hours a day, 6 days a week. It was really cool to see the flattened cartons be folded, filled, sealed, and stamped in a matter of seconds as they made their way down the winding conveyor belt. I also watched as bottles of various sizes were labeled, filled, and capped.

Processed milk is then loaded onto Turner’s trucks, which typically cover 50 delivery routes every day. In all, it only takes 36-48 hours from the time Turner’s receives the raw milk to the time it’s delivered to their customers. That’s fresh!

My visit with Turner’s didn’t end there. Part of the company’s commitment to high standards includes knowing exactly where all of their milk comes from. Unlike many other dairies, Turner’s doesn’t purchase milk from a co-op. They work exclusively with 50 local farmers within a 70 mile radius of the dairy, and they hold those farmers to the same high standards. Inspectors from the dairy visit with Turner’s farmers 3 times every month to check up on the farmers’ operating systems and to ensure that the cows supplying the milk are healthy and comfortable. 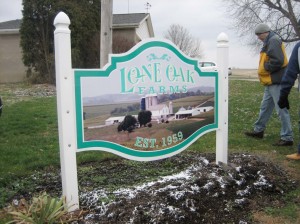 In my next post, read about my visit to Lone Oak Farms in Westmoreland County PA. Lone Oak has been supplying milk to Turner’s for over 50 years, and they were kind enough to give me a tour of the farm.

To learn more about Turner’s Dairy, visit their website at http://www.turnerdairy.net/

Until next time,
Jamie